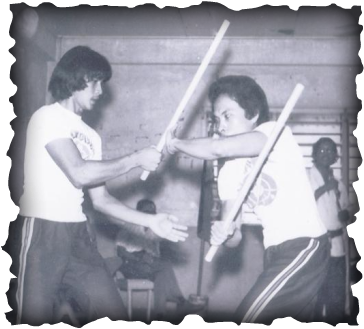 At about the start of the American regime, the Cañete siblings began their training in Eskrima. Brothers Florentino and Eulogio Cañete (later to become the principal organizer and president of Doce Pares) started their initial education from their father Gregorio, Gavino Cañete, Pedro Cañete and uncle Juanso dela Cuesta (their mother’s brother). They also trained with other well-known masters, namely, Tenyente Piano Aranas, Goriong Tagalog, Juanso Tikya, Andres Suares, Tito de Goma and Cesario Aliason. But the Canete’s quest for more Eskrima knowledge brought them to meet the more famous eskrimadors at that time, Lorenzo Saavedra and his nephews Teodoro Saavedra and Federico Saavedra at San Nicolas district in Cebu City where the Cañete family moved from their original residence in the town of San Fernando, some thirty kilometers south of the city.

In early 1920, the Cañete’s joined the Saavedra’s when the latter founded the Labangon Fencing Club, the first-ever Eskrima organization in the Philippines. (The group used the word “fencing” because of the influence of the Americans who referred the art as such, being similar to the European sport or art of fighting with the use of saber, foil or epee. The American influence would later become more apparent when Doce Pares used and adopted more English words to identify and describe techniques or forms. “Tatang Ensong” as Lorenzo was fondly called, and Teodoro, nicknamed “Doring”, guided and helped the Cañete’s in their ardent desire to expand their understanding and knowledge by teaching them advanced techniques of Espada y Daga and close quarter style of fighting (corto). The close association and friendship of the Saavedra’s and the Cañete’s further strengthened even after the dissolution of the Labangon Fencing Club in 1931.

On January 11, 1932, Eulogio Canete, Lorenzo Saavedra, Teodoro Saavedra, together with the most renowned eskrimadors, mainly from Cebu, decided to form another group, the Doce Pares.  A society formed to promote the only original native martial art of the Philippines, Eskrima.

“Doce Pares” is a Spanish term that means ‘Twelve Pairs’. However, the term has been given several meanings. One will refer to the twelve basic strikes that are common in most Eskrima styles and schools and their twelve basic blocks and counters to these strikes. Another more romantic explanation is in reference to the famous twelve bodyguards of Emperor Charlemagne of France (AD 768-814), who were all top swordsmen. They were known to have fought and killed hundreds of their enemies in battles. The final explanation is that it was meant to honor the twelve Masters, who originally formed the organization. And when the membership arose to twenty four at the time of the inauguration, the term “Doce Pares”, became more significantly fitting, indeed.

In the election of officers on January 11, 1932, Eulogio “Yoling” Cañete emerged as President and Teodoro Saavedra, as Vice President. Other officers were Fortunato Penalosa (Secretary), Marcelo Verano, Diogracias Nadela, Filemon Cañete, Federico Saavedra, Strong Tupas, Rodolfo Quijano, Venancio Bacon, Florentino Cañete, Juanito Lauron and Magdaleno Cabasan. Composing the advisory board were Lorenzo Saavedra, Atty. Cecilio dela Victoria , Margarito Revilles and Dr. Anastacio Deiparine. (During the next 55 years, Eulogio was reelected 55 more times as President and served the position until his demise on June 26, 1988 at the age of 87)

During World War II, from 1941 to 1945, a number of the Doce Pares officers and masters, joined the United States Armed Forces in the Far East (USAFFE), and later, the resistance forces, who fought underground the Japanese occupation army. Sometime in 1943, Teodoro Saavedra, its Vice President and chief instructor was captured and subsequently executed by the Japanese soldiers. Since the founding of Doce Pares up to the time of his death, he was an undisputed kingpin of Eskrima. A year later, his uncle Lorenzo “Tatang Ensong” Saavedra died of old age. He was over 90 years old.

After the War, the prominent Doce Pares Eskrimadors regrouped and held several meetings regarding the resumption of the program for the promotion of the Filipino martial art. The most active members were the Cañete brothers headed by Eulogio as Club President. His brother, Ciriaco “Cacoy” Cañete, also a resistance fighter emerged as Doce Pares most skillful fighter and innovator.

And, when one of the top Masters of Doce Pares (Venancio “Anciong” Bacon), with some of his loyalists disaffiliated from the Doce Pares a few years later to form another Eskrima Club, Pres. Eulogio Cañete and his brothers, Filemon, Silvestre, Tirso, Rufino and Ciriaco (Cacoy) took full control of Doce Pares.

After the split, Doce Pares has been a recipient of many challenges from other clubs especially from the break-away group (Balintawak). To counteract this hostility, Cacoy immediately organized the Cebu Mutual Security Association (CEMUSA) in 1954, and became its leader. This elite group was composed of Doce Pares Eskrimadors who trained hard under the watchful eyes of Cacoy.

But when the Doce Pares President, Eulogio Cañete died in 1988, Cacoy succeeded him up to the present, and CEMUSA was dissolved.

Since its founding, Doce Pares has enjoyed a special reputation among Philippine martial arts organizations, as the developer and innovator of the newest styles and techniques in Eskrima. One of these innovations is the creation of Eskrido, which Cacoy Cañete developed in 1948. It is the art of Eskrima with locking and throwing techniques. He revolutionized the Filipino Martial Art in such amazing way that the unified system, incorporated some striking techniques, namely, slashes (linear, curving, semi-circular and circular), thrusts, hooks & butts, in combination with throws and take-downs, using the olisi. 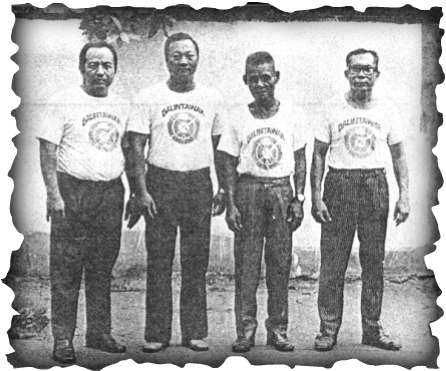 Early in the 20th century, the colonizing Spaniards left the Philippines, ending their 300-year rule. In their place, came the Americans. It was during this period of change that Venancio Bacon was born in 1912 in Carcar, Cebu. He grew up in San Nicolas town outside of Cebu City, he would become one of the Philippines’ most influential eskrimadors. He learned eskrima in the 1920s as a teenager. His formation as an eskrimador began in San Nicolas. This would later lead him to death matches, attacks, and eventually jail.

Bacon's only teacher was Lorenzo Saavedra, of San Nicolas, who during this time had established the Labangon Fencing Club. At a time when many different styles of eskrima abounded, Saavedra’s was called the Corto Linear, although he was known to have mastered other styles. His best students were Teodoro Saavedra, his nephew, and Venancio Bacon. The Labangon Fencing Club, however, eventually dissipated into nothingness.

In 1932, the Doce Pares Club was formed. Headed by Lorenzo Saavedra, the club was composed of three Saavedra eskrimadors and nine from the Cañete family. This constituted the original twelve members needed to symbolically actualize the title Doce Pares, which was named in honor of the Frenchman whom Saavedra befriended and whom he shared combat techniques with while in jail. Doce Pares also symbolized the Twelve Peers mentioned in the Matter of France - the knights or paladins of Charlemagne. Venancio Bacon was among the first members in the club and a few months later left the club due to arguments that the Doce Pares system was not an effective eskrima.

World War II broke out in the Philippines in the early 1940s. With the onset of Japanese occupation, many eskrimadors became guerrilla fighters, employing their art for the defense of their nation. It was during this time that Teodoro Saavedra died at the hands of Japanese soldiers.

After the war, in 1952, along with Vicente Atillo, Delfin Lopez, Jesus Cui, Timoteo Maranga, Lorenzo Gonzales, Isidro Bardilas, Andres Olaibar, and a few others, Bacon established a new club, calling it the Balintawak Street Self-Defense Club. The newly formed club started training in the backyard of a watch shop owned by Eduardo Baculi, one of Anciong Bacon’s students. This shop was located in a small side street in Colon, called Balintawak Street.

The 1950s and 1960s was the "Golden Age" of Eskrima in Cebu. Eskrimadors from various camps, mainly the two already mentioned, tested each other’s skills in all-out challenges. These resulted in injuries and sometimes deaths. Some were under honorable circumstances, while others treacherous.

Vicente "Inting" Carin of Doce Pares found himself attacked by multiple assailants, incurring various injuries, while reciprocating lethal injuries on his attackers he was able to adapt the balintawak style fighting to fend off his assailants. Delfin Lopez was knifed from behind, resulting in his death. Venancio Bacon was ambushed in the dark while walking to his home in Labangon. He killed his assailant.

Balintawak, also known as Balintawak Eskrima or Balintawak Arnis, is a style of Filipino martial arts developed by Venancio Bacon in the 1950s from earlier tutelage of Lorenzo Saavedra. It is named after Cebu City's Balintawak Self Defense Club, where it was originally taught. In turn, the club took its name from the street of its location, Balintawak Street, where the original Balintawak masters trained.

Bacon was incarcerated for killing an attacker, who was armed with a knife, in self-defense, the judge ruled that Bacon’s martial arts skills could be considered a lethal weapon and should have been used with restraint and or control so as to disable his attackers at that time. Bacon was paroled from prison in the mid-1970s. When he returned to Cebu, he continued to check on his students, making sure the quality of Balintawak was still up to his standards since he left. Bacon regularly attended training sessions conducted by Jose Villasin and Teofilo Velez. A few years after, Bacon died.

Bacon's successors soon began to systematize the Balintawak curriculum.Teofilo Velez and Atty. Jose Villasin, who set about to group the style into its various categories so that his students could master one set of related techniques and then move onto the next set of related techniques. At this point, several distinct schools of Balintawak emerged. Many of Bacon’s Balintawak students and some of his and the Saavedra's Doce Pares students continued to teach in the old method of random instruction, while Villasin taught in his "grouping” way of teaching.

Today, it may be concluded that the original Balintawak of Bacon is no longer taught, though there are a number of Balintawak groups that continue to teach their version of the system. Some instructors use a "grouping" method for teaching the techniques while others continue to teach single responses in the original way. The principles and concepts of Balintawak have, however, found their way into many different Filipino martial arts methods, most notably Balintawak student Remy Presas' Modern Arnis.

Balintawak principally teaches single stick fencing, in a dueling format, sometimes a small second stick is used to simulate a dagger. Bacon developed single stick techniques, as during his work-outs and training with other members of the Doces Pares Club before World War II, he would stab people with his wooden training dagger. Some say his dagger was taken from him by Saavedra, while others say he was simply asked not to train with it. Either way, Bacon with the help of Atty. Jose Villasin developed and optimized his techniques based upon single stick work. Atty. Jose Villasin with the tutelage of Bacon developed the twelve basic strikes which are now used worldwide.

Balintawak uses twelve basic strikes because the human body is limited in movement. These twelve strikes form the basis from which a practitioner can develop his basic, semi-advanced and advanced movements. 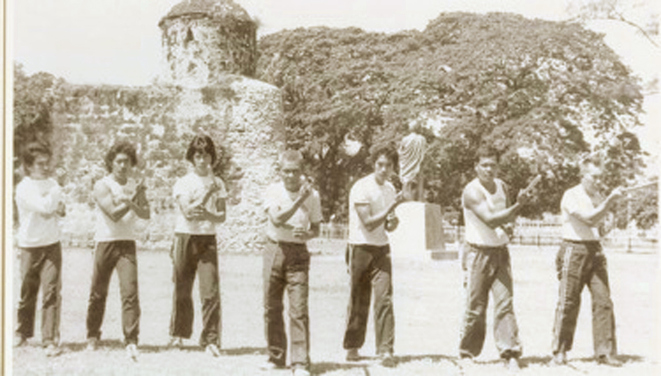